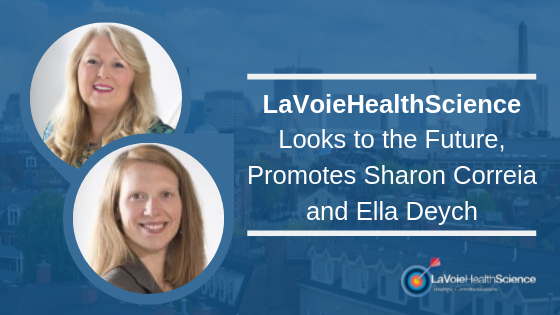 BOSTON/NEW YORK — August 13, 2019 — LaVoieHealthScience (LHS), an integrated investor and public relations consulting agency focused on advancing health and science innovations, today announced the promotion of two of the agency’s senior-level employees. Sharon Correia, who has been with LHS full-time since 2016, will serve as Executive Vice President, Integrated Communications and Chief Strategy Officer. Ella Deych, who joined LHS in 2015 as the agency’s first executive overseeing finance and operations, is now Vice President, Finance and Chief Operations Officer.

Sharon is an industry veteran who boasts more than twenty years of experience in health and science communications. She joined LHS in 2016 as Vice President, Integrated Communications after previously serving the agency as a senior consultant since 2010, whilst ramping up on an orphan drug communication commercialization program for Pfizer. Prior to making a full-time move to LHS, she held the role of Senior Director, Corporate Communications at Navidea Biopharmaceuticals as well as other communications and PR roles at emerging biopharmaceutical companies.

“Over the last several years, Sharon has grown with the agency — evolving her position from a hands-on executor to a senior executive capable of digging in while providing overall strategic direction on our accounts,” stated Donna LaVoie, President and CEO. “As Executive Vice President, Integrated Communications and Chief Strategy Officer, Sharon will work with me and our senior leadership team to drive strategic direction on existing and new client business.”

In 2015, Ella joined LHS from Racepoint Global, where she most recently served as the firm’s Finance Manager. Since starting at LHS as the agency’s Director of Finance and Operations, Ella has held several titles of increasing responsibility. “She has shown yearly growth and progression and has long been an important member of the senior leadership team,” said LaVoie.

As the Vice President, Finance and Chief Operations Officer, Ella will be the senior executive tasked with overseeing the day-to-day administration and operational functions of the agency.

“With new clients, new hires and the promotions of Sharon and Ella, our agency is seeing significant growth in our eighteenth year as a firm. I look forward to the future with my incredible team,” concluded LaVoie.

LaVoieHealthScience partners with leading health and science brands to build value for their companies, attract capital and reach key stakeholders through integrated communications, access and marketing. The firm provides public relations, investor relations and marketing consulting to build recognition and increase sales and value for health science innovations. The agency has received over 30 awards in recognition of the work it has done for its health and science industry-leading clients and was inducted in the 2018 Inc. 5000 Hall of Fame List of Fastest Growing Private Companies, ranked on the  O’Dwyer’s list of 2019 Healthcare Public Relations Firms, PR Week’s list of 2019 Top Agencies and Boston Business Journal’s list of Largest Public Relations Firms in Massachusetts.

JTC Team and LaVoieHealthScience to Host Virtual Investor Summit on April 22 and 23, 2020

Access the event and schedule of presenting companies at virtualinvestorsummit.com Live audio webcast presentations and interactive Q&A Company presentations will be held from 10 AM-12 PM ET and 1 PM-3 PM ET on both days BOSTON/NEW YORK/New Jersey — April 9, 2020...